The Catalonia referendum raised risks for the Euro

The EUR/USD pair is falling at the beginning of October. Right now, the most serious threat to the European integrity principle is posed by Spain, where they held the referendum last weekend relating to Catalonia’s exiting the country. In the next several days, the news from Spain will be the main catalyst for the EUR/USD pair movements. The things the Spanish government will say, the way the country’s authorities and the outers will respond – this is what will be the reason how deep the main currency pair may fall.

So, about 90% of the Catalonian population voted for exiting Spain. In case of Catalonia, the autonomy implies tax independence and division of other financial flows. In theory, it may be a very painful process for Spain: Catalonia provides a bit more than 19% of the country’s GDP. If one looks further, one will see that 26% of the entire Spanish export come from Catalonia. Hence, the region is quite strong when it comes to taxes and helps other regions of the country to be more stable. We should also note that Catalonia is a great attraction for tourists and has a lot of intangible assets.

As a matter of fact, Catalonia is the Span’s main region, which makes the rest of the country wealthy. The next on this list are Madrid, Valencia, and Balearic Islands. All these regions earn more than they spend, and the entire Spanish economy is supported by them. If you take one link out of the chain, the system will not work properly.

As for possible consequences for the Eurozone, there is more in this than meets the eye. If we assume that Catalonia overcomes all difficulties that are being created by the country’s authorities right now, the region will be confronted with a question of its own currency sooner or later. Considering 40 years of talking about the autonomy, Catalonia will hardly want to continue using the Euro. This, in its turn, may result in exiting the Eurozone and dangers to the economic stability not only of Spain, but to other countries in the European Union as well.

Under such circumstances it’s quite logical to expect the European currency to come under significant pressure. While the referendum organizers are still counting votes and the Spanish official authorities are looking for solution of this problem, the EUR/USD pair is slowly moving to the downside and trading near 1.1170. However, if any aggressive comments or actions from Catalonia or Spain appear, the main currency pair is expected only to fall.

At the daily chart of the EUR/USD pair, we can see that the tendency reversed several weeks ago, after the price had broken the support level of the ascending channel colored in green. The pair has fixed below 1.1900, which means that the market participants’ sentiment is very “bearish”. The closest level for the price to break in order to continue falling is 1.1700. After the price breaks it, the instrument will continue its decline to reach 1.1425 and then 1.1250. 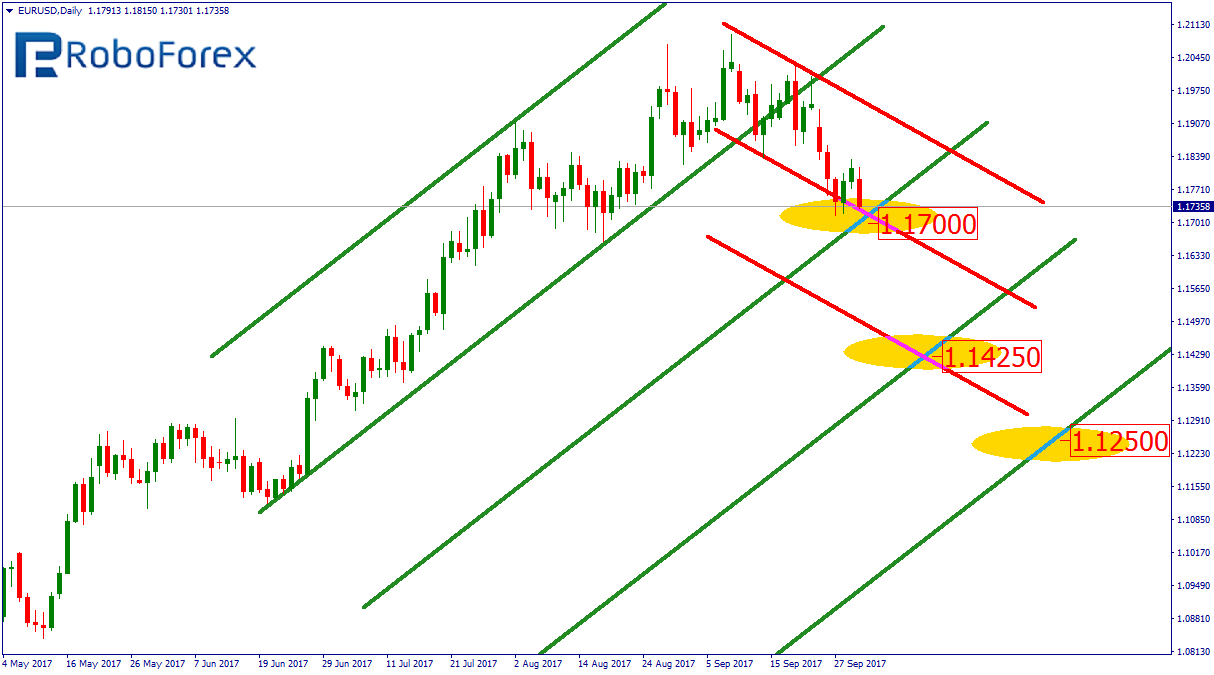 Attention!
Forecasts presented in this section only reflect the author’s private opinion and should not be considered as guidance for trading. RoboForex bears no responsibility for trading results based on trading recommendations described in these analytical reviews.