The U.S. dollar edged up after FOMC rate decision due to the fact that Fed tried to talk down Q1’s weakness. And there is no change in the expected rate path for Fed as markets are pricing in over 70% chance of a hike in June.

At present, most traders will look into U.S. non-farm payroll report to be released on Friday. The focus of forex markets today is the weakness in Australian Dollar dragged down to the lowest level since January 2017 by the slump in iron ore prices. Iron ore price started tumbling after Chinese Premier Li Keqiang indicated the plan to cut steel capacity. Infact based on that, Australia’s export values would probably continue to fall further ahead and there is more downside potential in the Aussie. 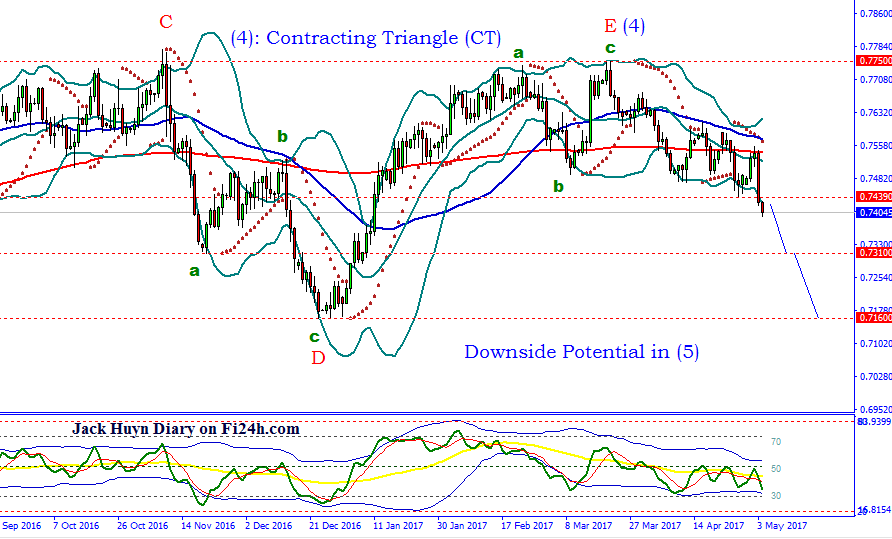 In terms of technical analysis, AUD/USD has broken below the important support level at 0.7440 (now to become new resistance), thus its intraday bias is turned back to the downside for deeper decline to 0.7310 support zone. I expect further fall will be seen back to 0.7171/0.7160 support zone in the coming sessions.

In intermediate term, whether there is no clear sign of a larger downtrend resumption yet, I believe in a strong downtrend to 0.6825 then 0.6000 in the next twelve months.